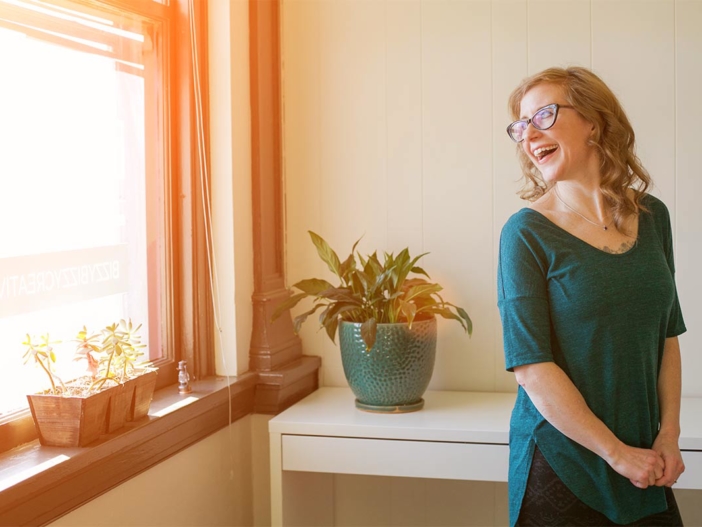 When I was in college, I took a freelance writing course. It was my first introduction into the concept of freelancing. The idea was that we came up with amazing article ideas and tried to get magazines to publish those articles.

I’m really into music, so I took the class as an opportunity to interview a bunch of local bands I liked and promptly submitted my articles to “Rolling Stone” magazine and the like. I was sure they would sense my creative genius, I would get published and become a famous music writer with access to all the biggest stars “Almost Famous” style.

If you are more grounded in reality than I, you can probably imagine that semester I received a total of 20 stock rejection letters from various magazines and not even a hint of interest from anyone.

My dreams of freelancing were immediately crushed, and I moved on to a more sensible path of working as a designer and editor in the newspaper industry.

Skip ahead a few years and a few employers later. I was miserable at my job as the managing editor at a magazine publishing company. Don’t get too excited. We were publishing trade magazines for police officers, a far cry from my “Rolling Stone” fantasies.

Although it was 2008 and the economy had just crumbled into a pile of rubble, I decided it was a great time to quit my job and start my own freelancing business. My partner, friends and family were extremely nervous for me, but being the ambitious and overly confident youth that I was, I went ahead and kissed my paycheck and health insurance goodbye and said hello to the world of freelancing!

Besides the shitty economy, my family was nervous for me because I was starting a freelance graphic design business, but I actually didn’t even go to design school. I certainly didn’t go to business school. And all my experience was working in the publishing industry. I had zero idea what I was doing, and I spent the next several years learning EVERYTHING THE HARD WAY.

What do I mean by that? Well, for starters, I didn’t know a single other person who was freelancing like me. My only link to that world was through the super outdated library and the World Wide Web. Youtube and Facebook were wee toddlers, and Instagram was just a twinkle in the eye of a couple of nerds.

At the time, I thought I was starting a “desktop publishing business” because that is the only thing I could find a book about in the library. I spent $3500 right off the bat to purchase a humongous commercial Xerox printer (the kind you find in the Kinkos copy center) because for some reason I thought no one would buy a design from me unless I was also printing their pieces.

I learned the hard way that not only is that not true, but printing business cards and brochures for people is extremely unprofitable (and awful) work. Holy papercuts, Batman!

Whereas many people start freelancing after having done similar work for an agency or big company, I learned everything on the job. I taught myself everything I know by Googling, reading books and articles and watching countless YouTube tutorials.

The first year I was freelancing, I made $7,000. The saddest part is that I was working about 50 hours a week, which works out to a humiliating $3 per hour. Oof. That sucks.

The first year I was freelancing, I made $7,000. The saddest part is that I was working about 50 hours a week, which works out to a humiliating $3 per hour. Oof. That sucks.

I made so many bad decisions and made so little money those first few years, it makes me want to puke just thinking about it.

Even before freelancing, I lived like a pauper for most of my twenties in tiny crappy apartments, shopping at thrift stores and working in food service at night and on the weekends to make extra cash.

It’s only because I had that lifestyle and made the good decision of saving up almost $10,000 before I quit my day job that I was able to continue freelancing even through all of those bad business decisions.

At this point, you’re probably thinking I might be the worst person to take advice from and you should stop reading before some of my bad ideas start rubbing off on you.

We’ll get to the turning point…

So obviously, the first few years were not exactly lucrative. But they were an amazing learning experience, and I was so much happier I was willing to do pretty much anything to continue being self-employed.

And because I learned all the lessons the hard way, I not only understand how to do all the things I’m about to share with you, but more important, I understand why to do them. I tried the alternatives; they didn’t work. I failed and failed and failed…until I succeeded.

My success metrics may not be as shiny or mind-blowing as all those online gurus. I am not a millionaire. I certainly don’t live in a mansion with my team of butlers and personal stylists. I don’t even know how to spell yot.

But I have done a few things I think are pretty badass over the years. I am proud to say I have been working full time in my own business for 10 years now, without having to flip burgers, peddle Avon or hawk any of my body parts (more on that later). I was able to make enough money in 2014 to support my family so my husband could take a leap and quit his job to start his own business. Now we’re both self-employed! Plus:

You Don’t Have to Learn the Hard Way!

If none of that sounds that impressive, perhaps you’re looking for the secret to getting rich quick. Unfortunately, I don’t have that knowledge. I wish I did! My road to what I consider success has been long and arduous. But I’m hoping to pass on my deep understanding of freelancing best practices to you, dear reader. May your path to success be straighter, faster and easier than mine was!

May your path to success be straighter and easier than mine was!

I am obsessed with entrepreneurship. I don’t believe in competitors—just industry peers and strategic partners. Sharing knowledge makes all our lives better. Some of the best things I’ve ever learned were direct from the mouths of so-called competitors. Some of the best partnerships and friends I have ever made were with people selling the exact same thing I was.

It’s true the market is saturated with literally thousands of freelancers and agencies. But we’re fortunate to be in an industry where there is more than enough work to go around. Frankly, I’m not worried about it, and you shouldn’t be either. That’s why I’m not afraid to “open the kimono” to everything I’ve learned.

You might be one of the freelancers who is struggling to get clients. Maybe each project feels like you’re reinventing the wheel. Perhaps you’re struggling with knowing what to charge. Or bad clients are sucking your will to live. Maybe you’re working a lot of hours like I was but still struggling to pay your rent. I’ve been there. I’ve done aaaaaall that.

At Bizzy Bizzy, our mission is to help freelancers get their shit together so they can make money and live the life they fantasize about when they are supposed to be writing that estimate.

At Bizzy Bizzy, our mission is to help freelancers get their shit together so they can make money and live the life they fantasize about when they are supposed to be writing that estimate.

And let’s be perfectly transparent. This isn’t completely altruistic. I’m not independently wealthy to the point where I can just sit around all day writing amazing content for free. Some Bizzy Bizzy resources are free, some have a nominal fee, while others are a significant investment in time and money. You can check that all out in our shop, which we’re adding products to every day.

Selling something (in my case, tools, templates, tactics and training) to your peers is just a different business model based on productizing hard-earned knowledge. We’ll talk more about productizing later. Of course we hope to make enough money on this to sustain this business and keep the great content coming.

My motto is, “When life gives you lemons, A/B test them, propagate the very best lemons and sell them to anyone who is starting a lemonade stand so they don’t have to grow their own lemons or make crappy lemonade for two years before going out of business.” I’m working on shortening that motto.

With that said, if the content isn’t good and we’re not really helping anyone, then this business is pointless. So I invite you to participate in our community of freelancers. I encourage your feedback and ideas. I want your suggestions on what kind of help you need to make your business more successful and what things you’ve learned on the way.

What are your lessons learned the hard way from when you were starting your freelance business?

Want to join the discussion?
Feel free to contribute!

Prepare to Grow: 12 Things to Do Before Scaling Your Freelance Business

We may request cookies to be set on your device. We use cookies to let us know when you visit our websites, how you interact with us, to enrich your user experience, and to customize your relationship with our website.

Click on the different category headings to find out more. You can also change some of your preferences. Note that blocking some types of cookies may impact your experience on our websites and the services we are able to offer.

These cookies are strictly necessary to provide you with services available through our website and to use some of its features.

Because these cookies are strictly necessary to deliver the website, refuseing them will have impact how our site functions. You always can block or delete cookies by changing your browser settings and force blocking all cookies on this website. But this will always prompt you to accept/refuse cookies when revisiting our site.

We fully respect if you want to refuse cookies but to avoid asking you again and again kindly allow us to store a cookie for that. You are free to opt out any time or opt in for other cookies to get a better experience. If you refuse cookies we will remove all set cookies in our domain.

We provide you with a list of stored cookies on your computer in our domain so you can check what we stored. Due to security reasons we are not able to show or modify cookies from other domains. You can check these in your browser security settings.

We also use different external services like Google Webfonts, Google Maps, and external Video providers. Since these providers may collect personal data like your IP address we allow you to block them here. Please be aware that this might heavily reduce the functionality and appearance of our site. Changes will take effect once you reload the page. 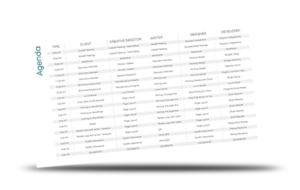 Get an inside look at how our web agencies create a website in a day! Download our free 1 Day® Website Agenda to see exactly what happens at what time during the day. It’s not magic, but in some ways it’s better!